I chose to do this write-up on LazySysAdmin because it is a good box for potential OSCP students to start out on and something that every OSCP pentester and every current OSCP (PWK) student that is ready to take the exam should be able to do without using a walk-through. This box should take 6 hours or less if you do not experience any hang ups or interruptions.

My first initial NMAP scan I did a service scan on all 65535 ports. I usually port scan in two steps; First finding all ports that are open and then running a service scan against only the open ports in order to save time during the reconnaissance phase.

Nmap Service Scan against all ports

To start my web enumeration I began with a basic Nikto scan of the target machine. In doing so reveals several notable webpages to investigate further.

We will note these pages for further enumeration.

Having discovered that a possible WordPress site was running on the target machine, wpscan was used immediately after the web-scan completed. The user Admin was discovered. 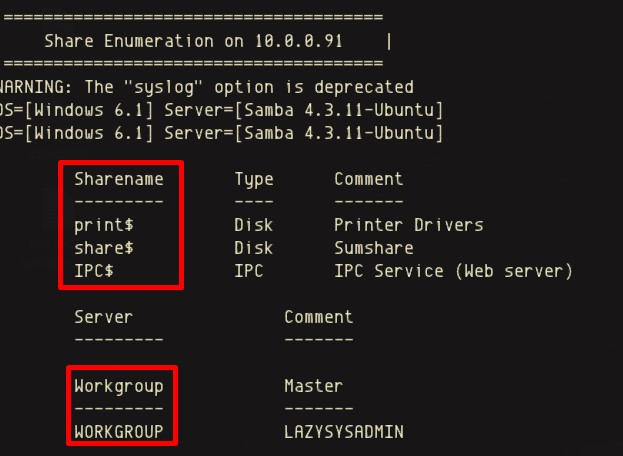 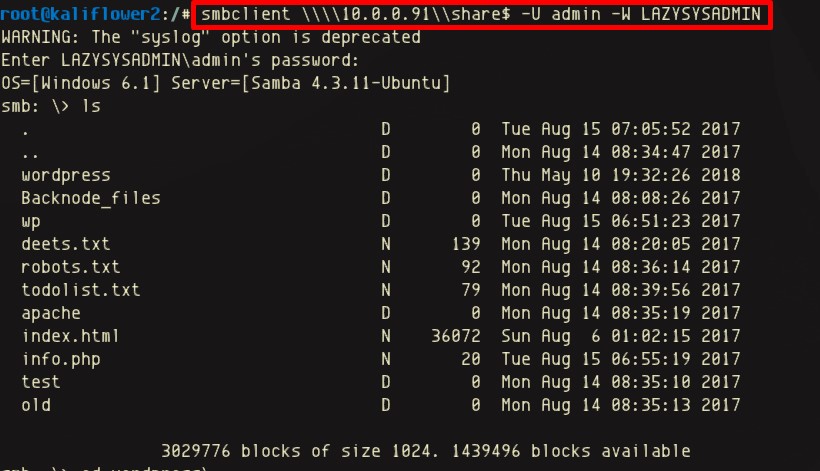 Having connected to the SMB share named share$, allowed for the wp-config file and several other files containing passwords to be retrieved.

The /wordpress/wp-config file revealed to following username and password combination:

Armed with the password taken directly from the wp-config file, a successful login attempt as user ‘Admin’ was made to authenticate into the WordPress administration panel:

Below is a snippet of the modified “Akismet Anti-Spam”plugin. All of the plugin contents have been removed except for the header comments and the PHP tags themselves. Towards the bottom of the snippet you will see the beginning my php-reverse-shell code that replaced the original PHP plugin content:

Once the shell code was added the plugin was reactivated and a reverse shell connection was received.

Now that a local connection has been established, the /etc/passwd file was read in order to see the local users on the target machine for possible attack trajectories to root.

Next passwords that were enumerated earlier in the process are used to see if authentication to other users on the target machine is possible:

Using the password enumerated from the deet.txt file during the SMB enumeration happened to be the login credentials for the user Togie!

sudo -l reveals user can run any command as root

Immediately after logging in the sudo privileges for user Togie were checked revealing that this user has the ability to run ANY program on the machine as root! Upon seeing this we run “sudo su,” enter the password for Togie, and receive a command line now possessing root privileges!!

Below, the proof.txt was read from the /root/ directory validating that this machine has been exploited successfully:

Additional learning for you

Now that the box is rooted continue playing and familiarizing yourself with some of the services running on this machine. There is a phpmyadmin page along with a SQL database running locally on this machine that was not included in this write-up. If you have some time to learn and nothing on your agenda try to find out were the password files are for these services running on the target machine. Also, see if you can discover a new attack vector that hasn’t been discovered yet then write your own write-up!